My son was not a talker. Early on, he was diagnosed with a genetic disorder called Cornelia de Lange Syndrome and many children with CdLS don’t ever learn to talk.  We were determined that he would have some type of language though and used the library for sign language resources and of course, for books to read together.  He was over a year behind on his speech despite regular speech therapy, parenting courses on helping your little one speak, at least once a week Storytime at the library, daily reading together and modeling nearly constant talking as we went about daily chores and errands.

One of your librarians who seems to have a particular affinity for little ones, was always a favorite with him even before she discovered his magic “on” button.  She always talked to him and engaged with him as if he were responding. One day, she started to give him a Thomas the Train sticker but at the last minute pulled it back and said, “Oh, maybe you don’t want this?”  He looked at her, vaguely stricken. She asked, “Do you know the magic word?”  Well, he did know the magic word but he only signed it by rubbing his chest with his fist, thumb extended.  She looked at him, pretending puzzlement, “I don’t know what that means.”  He looked at me. I shrugged.  He looked back at her. She cocked her head.  Still nothing. She looked down and started to return the sticker to the drawer.  Seeing the loss looming, my little guy decided he would speak up!  “Please!”  The librarian’s face lit up!  “You do know the magic word!” And then she proceeded to give him the sticker. Tears in my eyes, I touched his shoulder to get his attention and I put my fingertips to my lips and back down again (signing “thank you”) and smart little guy(!), he said out loud, “(th)ank you!”  Which then earned him another sticker!  He positively vibrated with his success and excitement. And I resolved to go out and buy Thomas stickers right then!  I thanked her for the motivation she gave him to speak and she just smiled and handed me a packet of stickers.  “Be sure to say goodbye to me on your way out,” she said to him.

I used a full page of those stickers that morning while we were looking over children’s books…rewarding him for any word he would try to say out loud as I pointed to pictures of things I knew he knew the word for.  He picked out a dozen Thomas books that morning and over the week started using “out loud” words for things he really wanted…cookie, train, juice, Glo (his glow-worm stuffed animal), paci…and of course, book.

Well, that little guy is now a teenager and he still doesn’t much like to talk to people he doesn’t know but he is non-stop at home (and with his favorite librarian at Calvert Library). That librarian continues to ply him with motivating gifts…not stickers anymore but new books to try out…often a series that keeps him hooked for a while. And so he loves to read.  He’ll perhaps lag behind other kids in terms of vocabulary and communication skills for a while yet, but with a love of reading, I feel confident that he will continue to learn.  Thank you for the gift of communication, the gift of reading, the gift of learning and especially, the gift of caring. 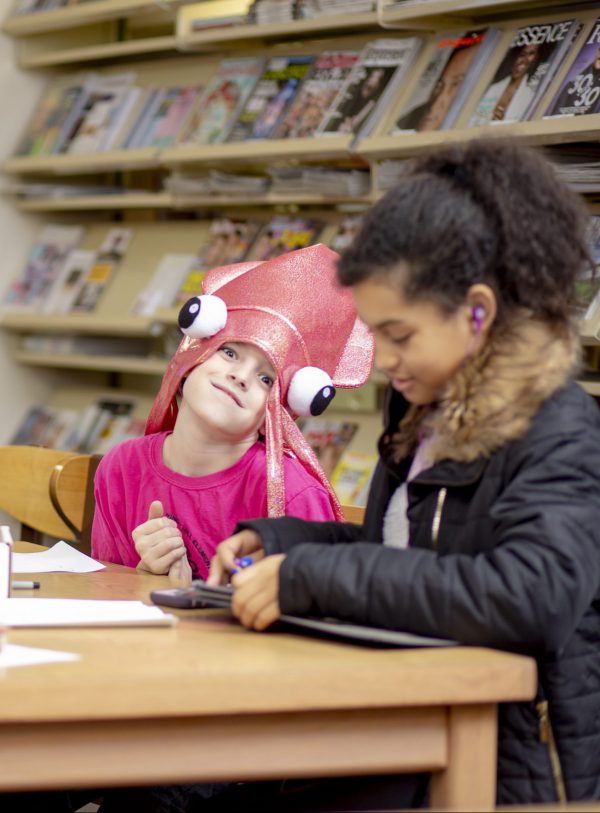